Saint Boniface Pipe Organ
Saint Boniface is fortunate to have K.C. Marrin, a Master Pipe Organ builder as a parishioner. Our pipe organ's story starts with the with a fire at another church, St. Mark's Catholic church in Shakopee. The organ was not destroyed by fire but sustained extensive water damage leaving little beyond the metal pipes salvageable. K.C. Marrin salvaged these pipes with hopes to use them in the future.

Click Here for more information about the dedication and the organ's specifications.

Click Here to read a recent article talking about our organ. 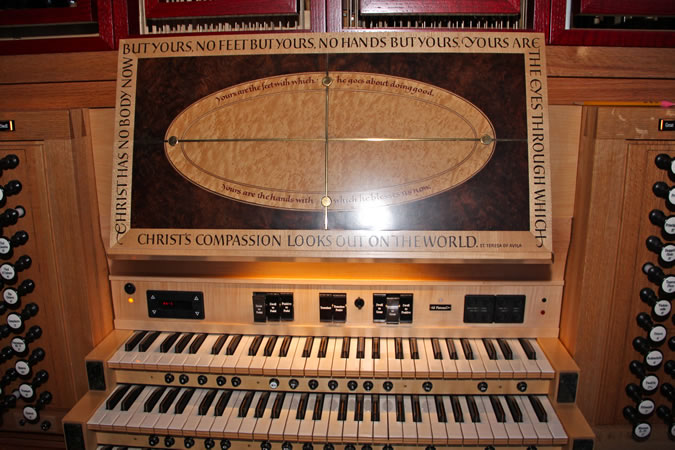 Saint Boniface's Crucifix was built and assembled by parishioners. An anonymous donor gave the funds to make the cross a reality. K.C. Marrin designed the cross and utilized the beams from the steeple from the old church to make the cross. (The old church was removed in 2005 to make room for the current Parish Center.) Metal Fab of Cold Spring fabricated the metal frame of the cross. Gary Terhaar of Ter Haar Studios designed and created a series of stain glass panels for the cross. These stain glass panels are removable and are changed according to the liturgical season. The Corpus was designed and created by Brother David Paul Lange, OSB, of Saint John's Abbey. 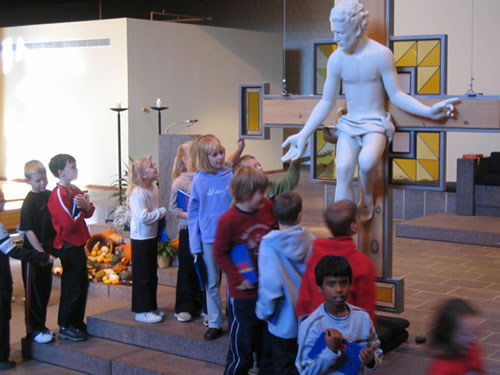